Do you have the right gaming Internet speed to beat the competition?

It's no longer a technology of the future. It's easier than ever to strap on a headset and explore all sorts of immersive VR worlds. VR is an incredible technology when executed well, and there's no better way to experience it than VR gaming.

VR gaming is shockingly easy to do. Early VR gaming headsets required powerful PC gaming hardware and extensive setup. Nowadays, it's possible to get a robust VR experience with just a headset and a pair of controllers.

So, how do you get into VR gaming? What headsets are standalone and which require a PC or console? What are the benefits of each? And what games should you even play? Optimum answers all that and more in our guide to VR gaming.

While VR gaming is closely associated with PC gaming, it’s not the only place to play VR games.

The biggest non-PC platform is Oculus. Owned by Facebook, Oculus is one of the biggest brands in VR. Their most recent headset, the Quest 2, runs on a standalone operating system. Games are downloaded and played entirely on the headset through the Oculus store.

Another option is Playstation VR. First released in 2016 the Sony-built headset works with the PS4 and PS4Pro. It’s one of the easiest ways to get into VR gaming, though it lacks the features of some modern headsets.

Beyond those two, there are smartphone-based options like Google Cardboard and Samsung Gear. They’re interesting experiments, though for the most part the headsets are no longer supported with active development.

Unlike most tech categories, the number of VR headsets on the market is fairly small. There are a few things to think about when shopping for a VR headset.

First off, what platform will you be playing on? The Valve Index is one of the nicest headsets on the market, but it requires a pretty powerful gaming PC to run. The Quest 2 works all by itself, while Playstation VR only works on Playstation 4 consoles. If you do have a gaming PC, make sure it meets the minimum requirements for whatever headset you choose.

Space is a very important consideration. There are three "styles" of VR: seated, standing, and room-scale. Pretty much everyone should have room for seated VR, all you need is a desk or couch. Seated VR is great for games like flight simulators, but the vast majority of VR games are designed to allow for seated play.

Standing VR requires enough space to move your arms. It allows you full rotation of your body as well as crouching and leaning. You won't need a ton of space for this, just make sure you aren't knocking things over.

To walk around in VR, you'll need a room-scale setup. This requires the most space: 6.5x5 feet minimum, the larger the better.

Finally, there's tracking. Tracking refers to how the headset keeps track of where it and your controllers are in space. There are two types of tracking: inside-out, where the headset tracks via integrated cameras, and outside-in, where tracking is done by external base stations.

Most headsets use inside-out tracking. It's easy to set up and intuitive. Outside-in is less common, and you'll need to have room or at least two external base stations. The advantage of outside-in tracking is its accuracy. With up to 4 external base stations, it's very difficult for the headset to lose track of where you are during regular play.

With the above in mind, there are four modern VR headsets worth buying: the Oculus Quest 2, the Valve Index, HP's Reverb G2, and Playstation VR. Each has different pros and cons. 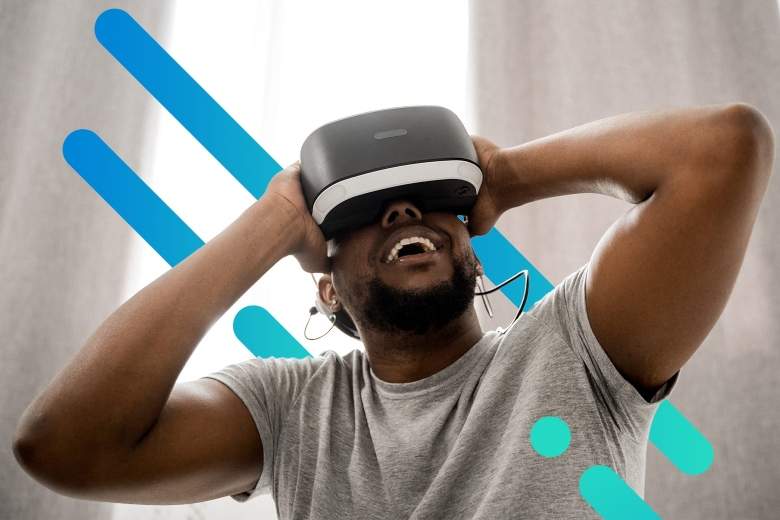 The Quest 2 is the only headset available from Facebook's VR brand. It's a standalone headset. Beyond needing a smartphone for initial setup, you can download and play games on the Quest 2 with just the headset and two included controllers. Games are limited to what is available on the Oculus Store, and unlike the original Quest, a Facebook account is required.

The Quest 2 is the best all-around headset for most people. It’s an incredible value at $299, and the included Oculus Touch controllers are excellent. It suffers from a lack of graphical power, though the optional Oculus Link cable allows it to be used with a PC. Most notably, the Oculus Store is missing out on a few key games, Half-Life: Alyx the biggest among them. Still, for the price, there simply isn’t a better entry point into VR gaming.

The Index, built by PC gaming giant Valve, is the most premium headset on the market. The fit and finish are unmatched. The headset itself is comfortable and adjustable, it fits a wide range of heads. The Index's integrated off-ear headphones provide the best audio in VR, and the included Knuckles controllers are excellent.

The Index uses external base stations for tracking, which are extremely precise. The downside is that they require setup. Ideally, you’d want to mount the base stations into a wall. The Index is also the most expensive headset on the market at $1,000. On top of that, you’ll need a gaming PC to use the headset at all. It’s a high-end system with high-end results: the Index is the best way to play graphically intense games like Boneworks and Half-Life: Alyx.

HP's Reverb G2 sits somewhere between the Quest 2 and Index. It was designed in collaboration with Valve and features the same best-in-class audio as the Index. The screen is incredibly sharp, and like the Quest 2, it uses inside-out tracking. You'll need a gaming PC to use it, but it can play any game on the platform.

The Reverb G2 is $599. It’s an interesting option for those who want a high-end Index experience for a more affordable price. It’s let down a bit by its controller tracking. HP’s inside-out solution is not as fine tuned as Oculus’s and the headset simply doesn’t track controllers all that well. If you’re mainly looking to play flight sims or seated games, this probably doesn’t matter. For more active games like Beat Saber, it can be a dealbreaker.

The Playstation VR came out in 2016, and it is showing that age. Controller tracking is clumsy, it has a single OLED screen, and it's not nearly as adjustable as modern headsets. Considering those issues, the headset is pretty solid. Screen quality is very good, and the headset itself is comfortable and easy to setup.

At $300, it's hard to recommend PSVR over a Quest 2. If you can find one on sale and already have a PS4 or PS4 Pro, it's a fantastic entry point into VR. Beyond that, most people should simply wait or look into a standalone solution like the Quest 2. If you're dedicated to VR gaming on a console, Sony has announced that they're working on a PSVR successor for the Playstation 5. It may be best to wait for more details on what that looks like.

What are the best VR games?

VR gaming is still fairly new. The earliest games tend to feel more like tech demos than full-fledged experiences, but that has changed in the last few years. Here a few must-plays:

Alyx is VR gaming’s killer app. Combining FPS and puzzle gameplay with triple-A story and production, it’s an incredible example of what VR can do when applied to a traditional big-budget game. Playing it is a wild experience. It’s one thing to shoot at a zombie with a controller. It’s another entirely to aim at him, miss because of your shaky hand, and physically lunge backwards to dodge an attack.

Technically, Boneworks is a single-player, narrative-driven first-person shooter. It’s a pretty good one! But what sets Boneworks apart is its physics engine. You can pick up and manipulate everything in the game. It’s incredible, a little janky, and leads to stuff like this. Boneworks is a good single-player game and an incredible sandbox.

Beat Saber is the single best argument for VR gaming. It’s simple: you have two lightsabers. You must hit slash blocks in time with music, like lightsaber Guitar Hero. The songs range from originals para Linkin Park y Kpop. It is an immediate and joyous thing to play, infinitely moddable, and a really good workout. If you only get one VR game, it should be Beat Saber.

Tetris Effect is a fantastic intro to VR gaming. The gameplay doesn’t require VR: it’s just Tetris. Which is a good thing. Instead of focusing on augmenting the gameplay, the VR piece of the game provides an immersive light show set to music. VR gaming doesn’t need to be active and stressful, sometimes you just want to chill. It’s weird to call a puzzle game transcendent, but Tetris Effect is just that.