In truth, getting into PC gaming has never been easier. And it's worth it. From sheer customization to cutting-edge virtual reality experiences, PC gaming can open up a variety of unique and rewarding experiences for every gamer.

With all of this terminology, getting into PC gaming can be overwhelming. From building or buying a PC to installing and playing games, Optimum has you covered with this guide. 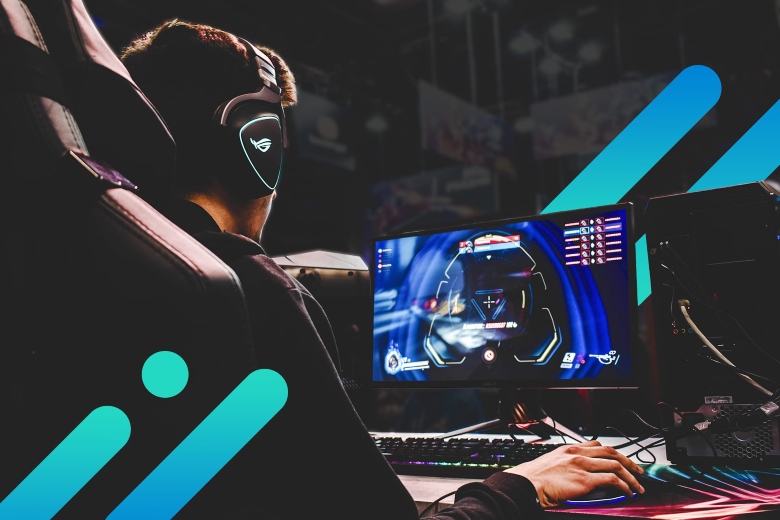 Why should I get a gaming PC?

One of the greatest benefits of PC gaming is graphics, both in how good they look and how customizable they are. If you want the best graphics and performance possible, you need to play on a PC.

With few exceptions, the PC version of a multiplatform game will look and play better than its console counterparts. Sometimes that edge is in performance (Destiny 2 is locked to 30 frames per second (FPS) on Playstation 4 and Xbox One, while the PC version consistently hits over 200) instead of looks. This is a really big deal: games feel incredible to play when it runs at a consistently high frame rate.

Game customization is also unmatched on a PC. You can play around with every setting imaginable: resolution, field of view, and control inputs to name a few. The graphical settings can get pretty granular, but the result is a game that looks and feels exactly how you want it. Whether that means making Cyberpunk 2077 look as good as possible or running Counter-Strike: Global Offensive at 400 FPS is up to you.

And there are a ton of games to play on PC. Most major, cross-platform franchises (think Call of Duty or Madden) have PC versions. Every first-party Microsoft game releases on PC the same day as the Xbox version. Even Sony is starting to release PC versions of PlayStation exclusives like Death Stranding and Horizon Zero Dawn, albeit a year after their PlayStation counterparts. Nintendo is the only real holdout, and you’ll need a Switch to play their games. But if you’ve got a Switch and a gaming PC, you can play almost any game you can think of.

PC is also home to genres that don’t traditionally appear on consoles. Massively multiplayer online role-playing games (World of Warcraft), tactical shooters (Counter-Strike, VALORANT), grand strategy (Crusader Kings 3) and multiplayer online battle arenas (League of Legends, Dota 2) are all best played—or only played—on PC. And that’s before you get into the niche genres like visual novels or hardcore survival sims. PC gaming is more than just better-looking versions of games you can already get on consoles.

Should I buy a gaming PC or build my own?

There are two ways to get a gaming PC. You can buy a prebuilt system or you can build one yourself. Each way has its pros and cons.

The prebuilt method is by far the most painless. The process is more or less the same as buying a laptop: pick a manufacturer, figure out which system fits your needs, and buy it. That's it-no installing Windows or parts yourself. At most, you'll need to get a mouse, keyboard, and monitor.

The main cons of buying a prebuilt system are price and customization. System manufacturers offer customization, but you'll be limited to what they have in stock. Some of the more affordable pre-built systems offer no customization at all. And a prebuilt system is always going to be more expensive than building your own. This makes sense: you're paying the components and the labor involved in building the system. It's up to you if that's worth it.

Building your computer can be daunting; it comes with some strong advantages. For one, the customization is unmatched. You'll get to choose exactly what goes into the system. It's also more affordable than opting for a prebuilt one, and vendors like Newegg, Amazon, or MicroCenter are always running promotions and deals.

The disadvantage here is that physically putting your computer together can be difficult. It's not an incredibly complicated process -you're more or less just snapping parts into the motherboard and screwing the motherboard into the case-but it takes time and requires care. You've also got to do more research when you go this route. The last thing you want to do is order a bunch of parts only to find out they aren't compatible with each other. So, make judicious use of PCPartPicker. This site will keep track of everything you need to buy, and it’ll flag any components that might not work together.

What parts go into a gaming PC?

Whether you go the DIY route or buy a prebuilt system, it's recommended that you have a general idea of what each component does. Fair warning: there are a lot of acronyms here. But you already know "PC" means "personal computer," so this will be easy.

No matter what, your PC will need a central processing unit (CPU or processor), a motherboard, storage, random access memory (RAM), a power supply unit (PSU), a graphics processing unit (GPU or graphics card), a case, and a monitor. Let's touch briefly on each component.

The motherboard is the piece that allows everything else to work together. All of your hardware will plug into it in one way or another. They come in different sizes, but they all do the same thing.

The CPU is the brain of your computer. It sockets directly into the motherboard and has a hand in everything your computer does. AMD and Intel are the two major CPU manufacturers. Their midrange chips are the Ryzen 7 and i5, both are excellent choices. The most important thing to note is that AMD and Intel CPUs use different sockets, the part of the motherboard where the CPU slots in. If you're building your PC, make sure your motherboard is compatible with your processor.

The graphics card is built specifically to process visual data and is incredibly important for graphically intensive games. The two major brands are Nvidia and AMD; both make excellent cards. Graphics cards, especially the newest versions, can be notoriously difficult to find in stock. Buying a prebuilt system can mitigate this to some degree. If you're building your own, you may have to wait to find a good card at a reasonable price.

Storage encompasses both hard drives and solid-state drives. A 1 terabyte solid-state drive will work for most people. You can always add more storage later, even if you're working with a prebuilt system.

RAM is your computer's short-term memory. Whether it's a game or a web browser, your software relies on RAM to store and retrieve data quickly. RAM is incredibly important if you want your computer to run fast and smoothly. Don't skimp out on it.

The PSU powers the whole computer. All PC components plug into it, you plug it into a wall socket, and boom: power. It's essential to have a power supply with enough wattage to power your PC. This won't be an issue if you're buying a prebuilt system but if you're building one, a calculator like this one from Newegg is helpful. You’ll want a PSU that can handle a bit more power than your PC needs.

Your PC case is, well, a metal or plastic case that holds all of your parts. Not much to say here, but getting one that's easy to work in is a good idea if you'll be building your computer.

A monitor is also exactly what it sounds like: it's more or less your computer's TV screen. There are a ton of options here, but a quality 24 inch/1080p monitor will be great for most use cases.

You’ll also need a keyboard and mouse. Your setup here depends on what games you’ll be playing and how you play them. If you’re planning on using an Xbox or PlayStation controller for most games, a basic keyboard and mouse setup is perfectly fine. If you’re going to dive into a competitive game like Starcraft 2 or VALORANT, you’ll want to look into mechanical keyboards and mice with adjustable sensitivity. 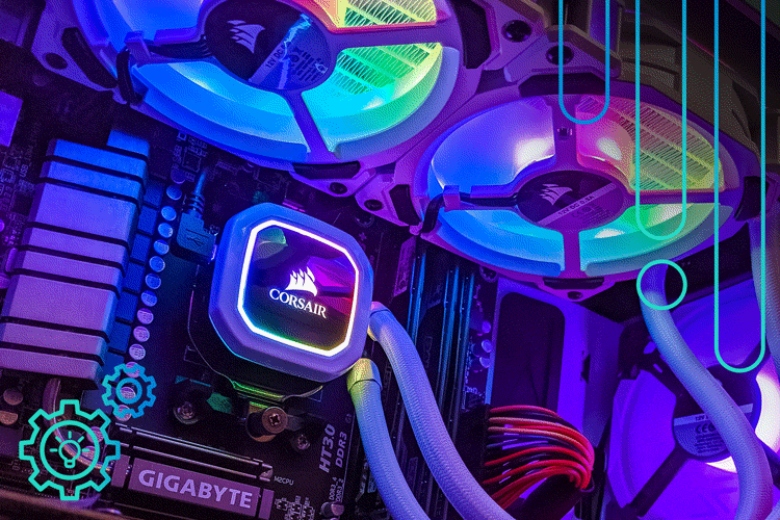 Where can I get PC games?

You’ve got a PC. Now, where do you go to play games?

The vast majority of PC games are played on digital distribution services. This is the case even if you purchase a game physically: you'll often need to activate online anyway. There are quite a few different platforms, but Steam and the Epic Games Store are the two most popular.

If you’re playing PC games, using Steam is borderline unavoidable. Launched in 2003 by Valve Software to keep their games updated, it’s evolved into one of the largest digital storefronts in the world. The only games exclusive to the platform are Valve titles like Half-Life: Alyx, Dota 2, and Counter-Strike: Global Offensive. Steam has a robust array of features too: friends lists, voice chats, groups, reviews, and even modding workshops are all built-in.

You used to find pretty much anything on Steam, but some major publishers (notably Ubisoft) are starting to skip the platform. Many have moved to the Epic Games Store. The Fortnite developer launched the store in 2018, and they’ve expanded rapidly since. Unlike Steam, Epic has made it a priority to have EGS exclusive games. Hades, Rocket League, Assassin’s Creed Valhalla, Borderlands 3, and Epic’s own Fortnite are a few notable exclusives. Expect them to add even more in the future.

There are a few other platforms worth mentioning. Battle.net is the only place to find Blizzard games like World of Warcraft, Starcraft, and Hearthstone, as well as Call of Duty and its Warzone battle royale mode. Riot’s League of Legends, the biggest game in the world, uses its proprietary launcher. The same goes for Riot’s newest title, VALORANT.

What games should I play on PC?

Tactical shooters are a PC gaming stalwart. Slow and cerebral, they reward patient play, meticulous planning, and precise teamwork. Since the release of Counter-Strike in 1999, the genre has followed the same basic tenets: two teams of five attack and defend; if you die you’re out for the rest of the round. Valve’s Counter-Strike: Global Offensive (CSGO) carries that legacy, though it’s gone from basement tournaments to selling out arenas. Riot’s VALORANT is a much newer franchise and trades CSGO’s hardcore gunplay for a more accessible, ability-focused game. Both are excellent, free, and worth trying.

Speaking of Riot, let’s talk about League of Legends (LoL) which is a multiplayer online battle arena (MOBA). Two teams of five battle on a map where the goal is to destroy the enemy team’s base (“Nexus” in LoL parlance). Each player controls a unique character they level up and improve throughout a match.

MOBAs are infamously complex, so it’s all the more impressive that League of Legends is one of the most popular games in the world. It’s a genre that rewards practice and persistence, where much of the reward stems from seeing yourself improve as a player. LoL is a difficult game, but if it clicks, it’s an incredible experience.

Half Life: Alyx and Beatsaber

Thanks to headsets like the Oculus Quest, virtual reality (VR) is starting to get accessible. That’s good because there are some incredible games to be played in VR. Half-Life: Alyx was one of the best games of 2020. It’s a fantastic triple-A adventure game that takes full advantage of VR.

Beatsaber is completely different. It's both great exercise and an absolute joy to play a rhythm game that sees the player slashing at blocks with a sword.

In 2004, World of Warcraft (WoW) made massively multiplayer online games mainstream. Seventeen years later, it’s still the king of the genre - for good reason. WoW is accessible without sacrificing depth and is seriously packed with content, with seventeen years of game code available. If you’ve never played WoW, it will be a long time before you run out of things to do.

Getting everything you need from your home entertainment system?