Where to Stream the Best Romantic Comedies

Romantic comedies are the best Valentine's movies to stream with your loved ones on this sweet holiday. You get all of the laughs and romance without leaving your couch. Romantic comedies, like any film genre, tend to have a proven formula with classic tropes that keep us streaming every time.

A mismatched couple "meets cute" and initially dislikes each other. When they're brought into close proximity through circumstances beyond their control, they find they have immense chemistry. A further sequence of events forces them to choose between budding love and their previous agenda. There's a frantic last-minute solution for the "meant to be" to end up together, everybody lives happily ever after, and the credits roll.

When something works this well time and time again, filmmakers get to introduce a variety of settings, and delight audiences with subtle variations on the theme.

The best rom-coms bring us good feelings, great laughs, and maybe inspire a little romance between any couple watching the film on a date or movie night. 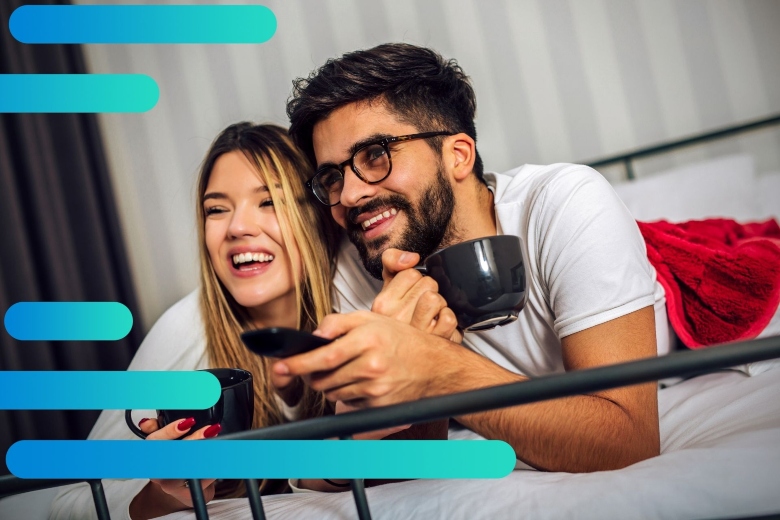 There's realism here that other rom-coms lack (thanks in part to the inclusion of "how we met" duologues from couples). "Can we just be friends" isn't a question that Harry (Billy Crystal) and Sally (Meg Ryan) can figure out over a weekend. In many real-life relationships, it takes time for people to figure out how they feel about each other. People tend to ping pong around: they'll get close, fall out of touch, and get back together again. When Harry and Sally figure it all out, it's a pleasant reminder that the rest of us can too.

It's 1987 and 13-year-old Jenna Rink wants nothing more than to be popular. Humiliated by a group of girls at her birthday party, she wishes she was 30 and goes to bed.

It works. She wakes up in 2004 in a Fifth Avenue apartment. She's the co-editor of her favorite fashion magazine. She's best friends with Lucy, one of the girls who embarrassed her at her party. And she's played by Jennifer Garner.

Garner is a romantic comedy stalwart, starring in films like Valentine's Day, Catch and Release, and Love, Simon. 13 Going On 30 is the star-making performance that made it possible. Her signature blend of innocence, comedy chops, and earnest authenticity is the perfect fit for the role of a teenager who just woke up 17 years in the future, totally confused.

Rachel Chu (Constance Wu), an economics professor at New York University, flies with her boyfriend Nick Young (Henry Golding) to his best friend's wedding in Singapore, where Nick grew up. They arrive, and - surprise! - Rachel discovers her unassuming boyfriend is the scion of an incredibly famous and wealthy family dynasty. Nick introduces Rachel to his mother, Eleanor (Michelle Yeon), who takes an immediate dislike to Rachel due to her working-class American background. Rachel has to prove herself to the family while navigating the strict, hierarchical structure of Singaporean high society.

A romantic comedy with an all Asian cast (the first from a major Hollywood studio in over two decades), Crazy Rich Asians is just as fresh and exciting as it was in 2018. A few years later, its dazzling visuals and biting, hilarious examination of wealth and class hit harder than ever.

Netflix is full of amazing romantic comedies and you can find all of them by using the Netflix rom-com code 5475. Learn how to find your favorite movies on Netflix with Netflix category codes, in the meantime here are two romantic comedies you’ll love:

Sometimes couples come to a crossroad in their relationship and the movie The LoveBirds follows Jibran and Leilani during this defining moment in their coupledom. But, instead of being able to figure things out peacefully on their own, they accidentally find themselves in the middle of a murder mystery. The journey to clear their names gets crazier and even more hilarious throughout the adventure. Hopefully, Jibran and Leilani (and their relationship) can survive the night. 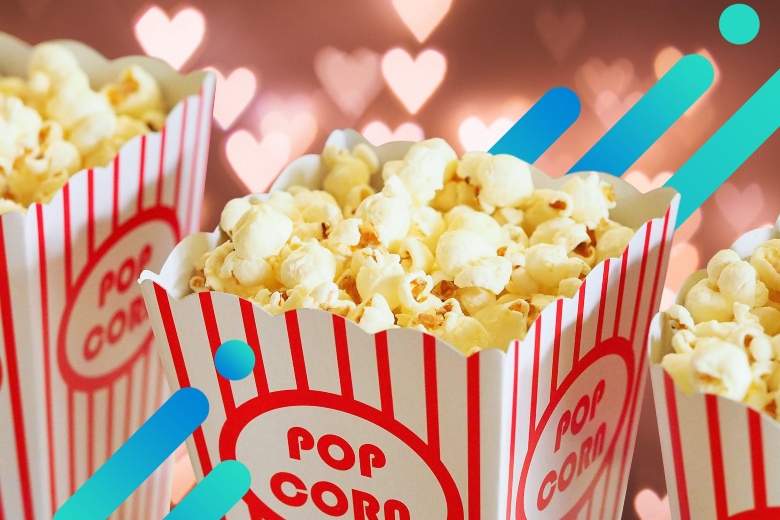 When Lara Jean Covey has a crush she doesn't tell them, she writes a letter to get her feelings out and then puts it in an old hatbox to never send. Or she hoped they would never be sent. After a Friday night watching TV (again), Lara Jean's younger sister realizes she needs more love in her life. So, she mails out Lara Jean's letters. Once her letters are out, her life drastically changes, now Lara Jean has to figure out her newly exciting love life with…a few different guys. You can keep up with Lara Jean's adventures with the next two movies in the To All the Boys trilogy, all can be streamed on Netflix.

As it turns out, the basic plot developments required for a romantic comedy can be pared down to allow plenty of room for world-building, character work, and good old fashioned ad-libbing. All you need is a simple but flexible premise. That's what Coming to America delivers. An African prince moves to Queens, New York to find his queen. That's all it takes to set the stage.

Coming to America is many films at once. It's a fish-out-of-water farce, a showcase for Eddie Murphy's prodigious comedic talent, and a loving celebration of Black community. But its heart (and storytelling spine) is all romantic comedy, with as satisfying a resolution as any you'll find. And after 33 years, Eddie Murphy created a sequel to the classic called Coming 2 America. You can stream it on Amazon Prime now.

Sleepless in Seattle is unique among romantic comedies in that it’s carried by the chemistry of lead actors who spend most of the film apart.

After losing his wife Maggie to cancer, Chicago architect Sam Baldwin (Tom Hanks) moves to Seattle to start a new life with his eight-year-old son, Jonah. After hearing Sam talk about Maggie on the radio, reporter Annie Reed (Ryan) writes a letter, suggesting they meet on top of the Empire State Building on Valentine’s Day. Sam needs convincing before he’ll go.

You'll spend all of Sleepless in Seattle rooting for Sam and Annie to meet. It's that central tension that makes the whole thing work. The near misses, phone calls and last minute decisions allow Hanks and Ryan to play off each other without actually appearing in all that many scenes together. Any moments they do spend together are that much more special.

Hanks and Ryan had starred in a rom-com together before in 1990's Joe Versus the Volcano. They'd team up for the third time in 1998's You've Got Mail. You could do all three in a marathon, but if you only choose one, Sleepless in Seattle is it.

Simon Spier is trying to solve a mystery. He's been emailing "Blue," a high school classmate. The two have bonded over their shared experience as gay, closeted teenagers. As their connection grows, Simon resolves to figure out who Blue is.

It's a blast to watch a rom-com where the lead doesn't know who he's fallen in love with. And mysteries are fun to solve. But what separates Love, Simon is how much it cares about its characters. It's warm but not cloying, clever but not mean. You'll want Simon and his friends to succeed, to figure out what they want from life and where they're going next - to the extent that any teenager can. You can stream the television reboot of Love, Simon, called Love, Victor on Hulu now.

Do you ever wish you could re-do your high school experience? Well, in the 90s rom-com, Never Been Kissed, a young copywriter at the "Chicago Sun-Times" gets to do just that. Drew Barrymore stars as Josie Geller, in high school she was far from being popular and now in her twenties she has the opportunity to do it all again when she goes undercover as a high school student for an article. With the help of her older brother, Josie infiltrates the popular crowd to get her story. Everything is going well, but there's one snag in her plan. Josie falls in love with her dreamy English teacher.

ABBA's song book comes to life in the 2008 rom-com, Mamma Mia. The jukebox musical stars Meryl Streep as Donna Sheridan, an independent hotelier in Greece who is working to set up her daughter's wedding. The bride, Sophie, creates a scheme to contact the three men who may be her father and invite them to the wedding. Just days before the wedding Donna's past comes to face her and each man works hard to have the honor to walk Sophie down the aisle. Enjoy the romance and sing along to the fun music at the same time. You can stream the 2018 sequel Mamma Mia! Here We Go Again on Fubo.

A classic 80's rom-com always hits the spot, especially when it's starring the rom-com darling Molly Ringwald and written by genius John Hughes. In Pretty in Pink, Andie is an outcast that mostly hangs out with her older boss at the record store or her quirky best friend Duckie. But, things seem too good to be true when the coolest guy in school, Blane, asks Andie out. She soon learns that dating someone in a different social circle is harder than she thought.