Every year AUSA sponsors incredible FIRST Robotics teams from around the country, and this year we’re excited to celebrate their accomplishments with our Altice Future Innovator Awards!

This award is given to the team that demonstrates efforts to serve as role models and influence younger students to participate in STEM programs. 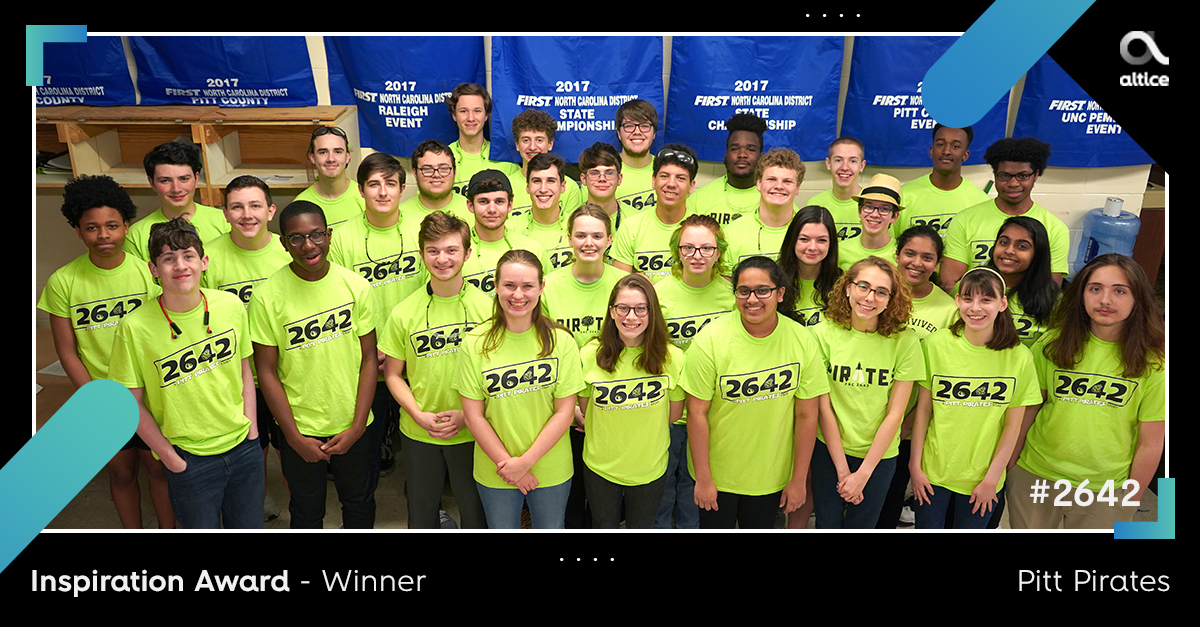 The Pitt Pirates have created programs to help spark interest in STEM for minorities, females, and disadvantaged youth, both locally and on global level. From running STEM summer camps, to starting and mentoring FIRST Lego League teams for younger students, to donating STEM kits to places around the world that do not have access to materials, the Pitt Pirates have made a substantial impact on inspiring interest in STEM. 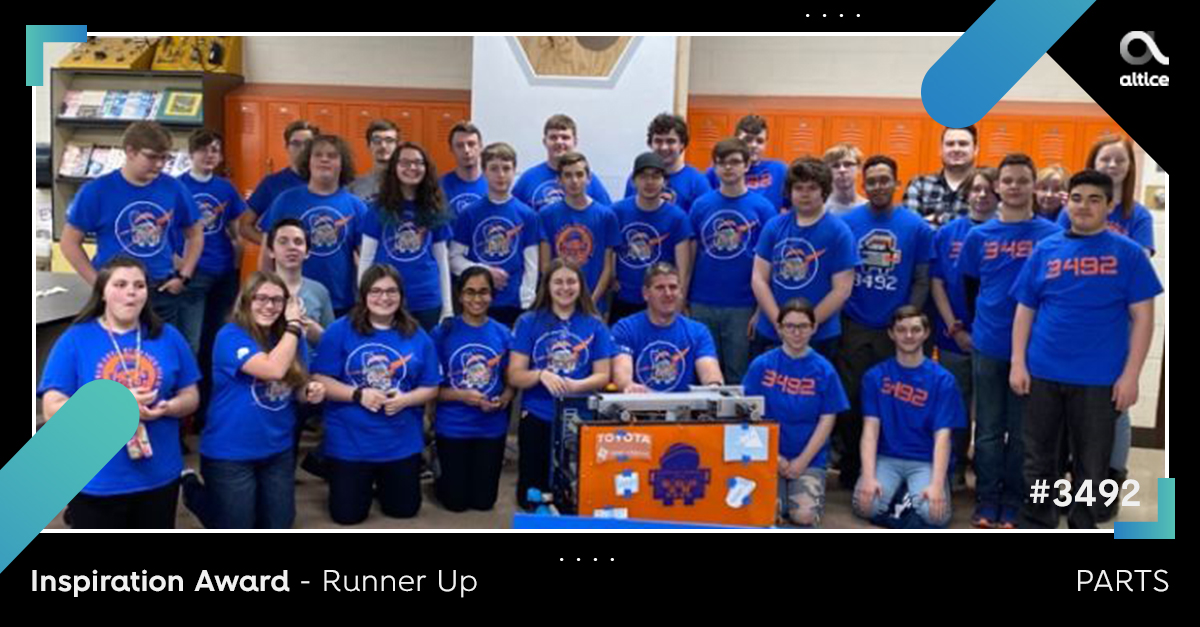 PARTs Team 3492 has been a successful advocate in promoting STEM education through their work at the West Virginia State Capitol and through the development and implementation of a STEM teacher training program. Their efforts in bringing STEM to others reached 46 of the 55 counties in West Virginia this year.

This award is given to the team that demonstrated efforts to make a positive impact on the local community. 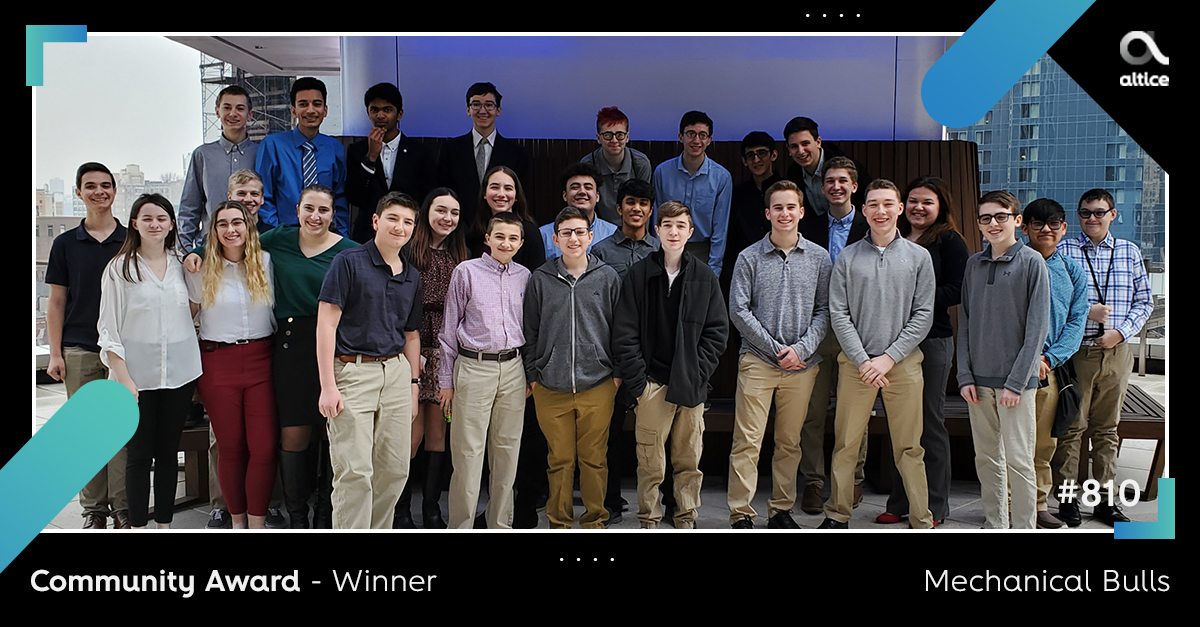 The Smithtown Mechanical Bulls have a strong commitment to giving back to their community, and the COVID-19 pandemic proved this commitment. After the cancellation of the FIRST Robotics season, the team quickly shifted focus to helping essential workers by creating and delivering 3D printed face shields. In 1 month they delivered over 2,500 face shields and are continuing production until needs are met. The team has also participated in the [correo electrónico protegido] supercomputing network, a project based at St. Louis School of Medicine to distribute the simulation of protein folding in an effort to discover a new druggable weakness in COVID-19. This has allowed students to use their computer's processing capabilities to aid laboratories throughout the world. 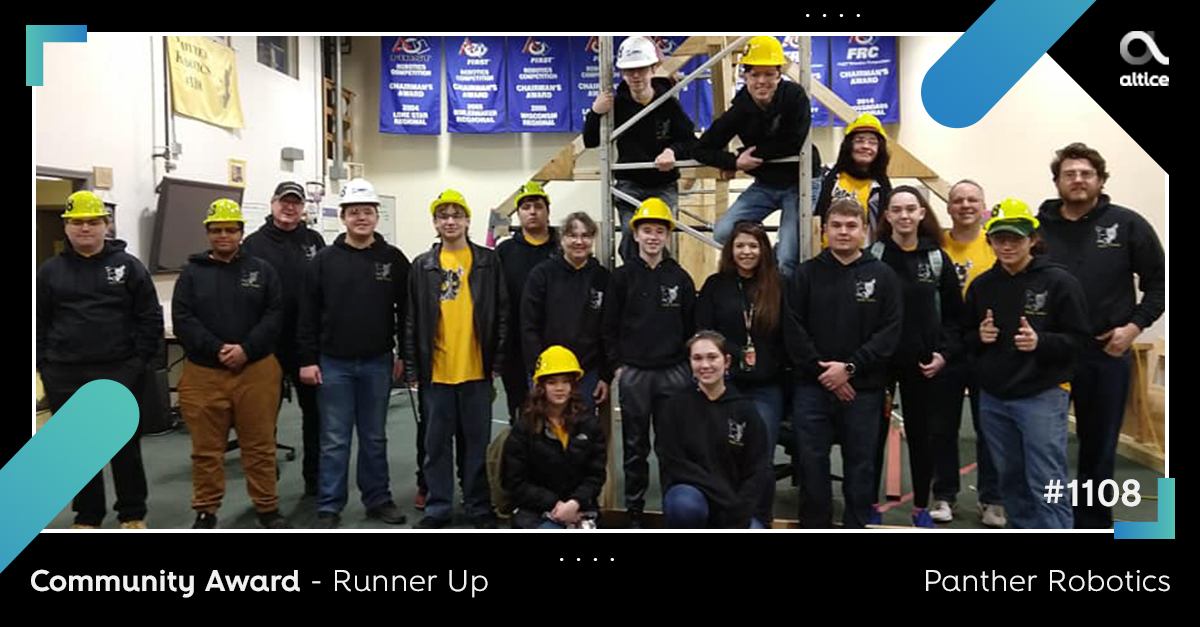 Panther Robotics is committed to impacting the communty in a positive way, working at STEM camps and volunteering at community events. After the cancellation of the 2020 season, the team used their 3D printer to print over 686 face shields and 192 ear savers. They also donated N-95 masks and safety glasses from their shop to first responders, and engaged young students in the community by sharing read-alouds and posting a daily lego challenge for elementary kids.

This award is given to the team that demonstrated successful growth and improvement over time since the team’s inception. 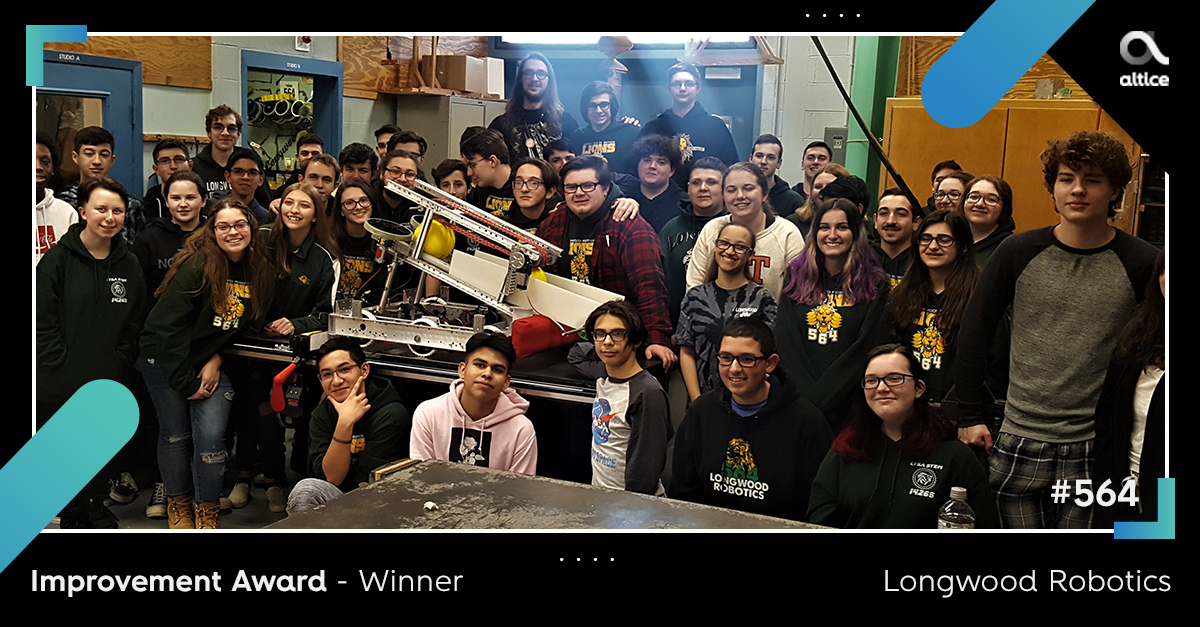 Longwood Robotics have come a long way since the team's inception in 2001, tripling in size and expanding their FIRST reach. This year they fully integrated a Lego League program into the district's 4th grade curriculum, impacting 1,500 students. They run and host Long Island's Lego League Championship and Lego League Junior expo every year and meet with the district's Technology Committee and Budget Advisory Committee to advocate for FIRST and increase awareness about the benefits of participating in robotics. 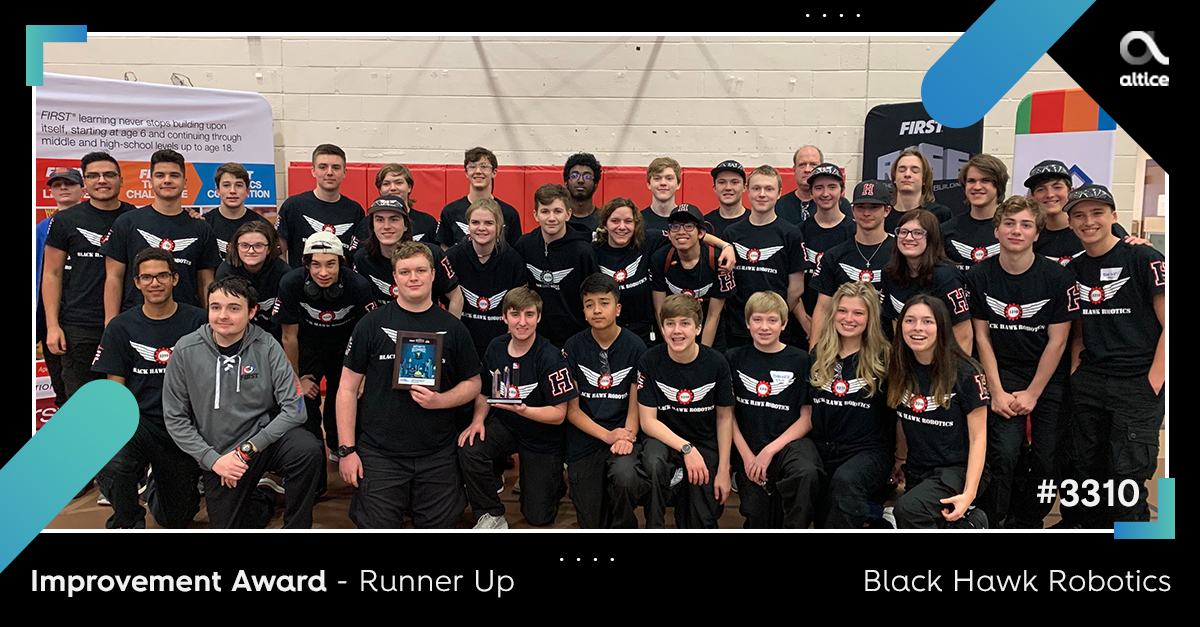 Team 3310 has evolved from a team that just builds robots and attends competitions, to a team with a passion for increasing awareness of engineering and promoting STEM education. Black Hawk Robotics has been successful in adding 15 STEM classes to the school's curriculum, including a 4-year engineering class, and their initiatives with elementary schools have resulted in the creation of over 70 robotics teams impacting 700 kids in the district. Additionally, they proposed and helped implement funding for a community bond to fund a Career and Technology Center in the district that provides over 60 technology-based programs and has prompted over 3,000 students to explore careers in STEM and earn professional certifications.

This award is given to the team that demonstrated inclusivity both within the team and through community service efforts. 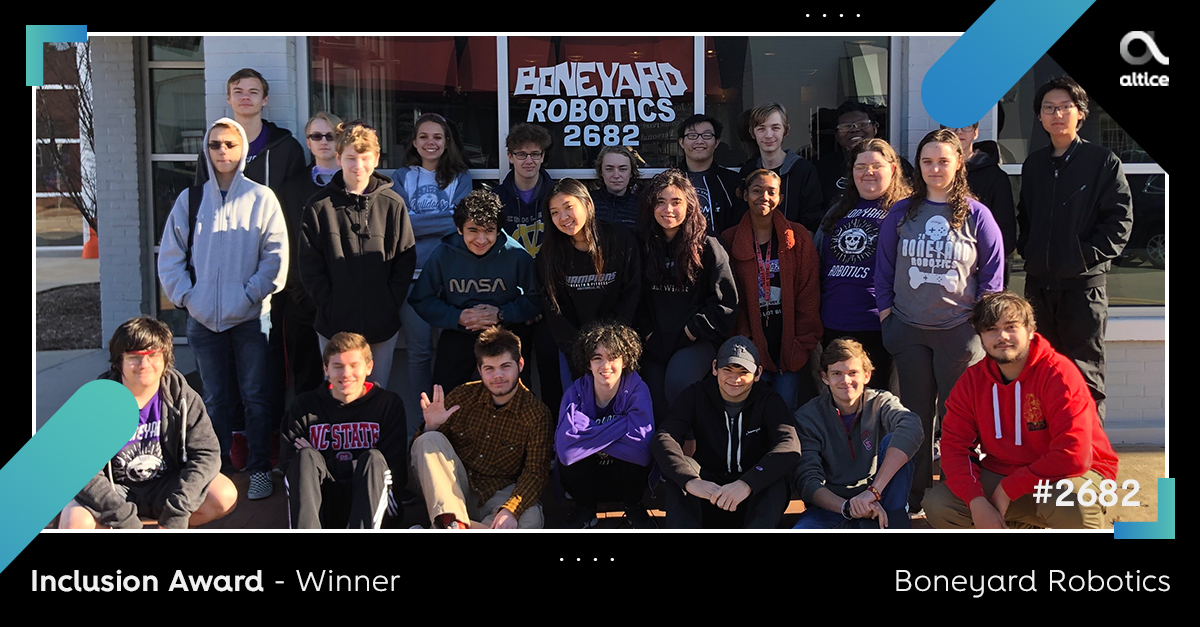 Boneyard Robotics' mission is to embrace and celebrate diversity and inclusivity, not only embracing differences within their own team that includes 40% neurodiverse members, but in their advocacy efforts of spreading awareness about the needs of those with autism in the STEM space. They advocated for developing a quiet room at the regional competition for students with autism, sent sensory and STEM kits to under-resourced areas around the world, and have developed an autism handbook they distribute to other FIRST teams to help them with supporting autistic students on their teams. Check them out here: https://www.youtube.com/watch?v=eNAtuc0LdiY&feature=youtu.be 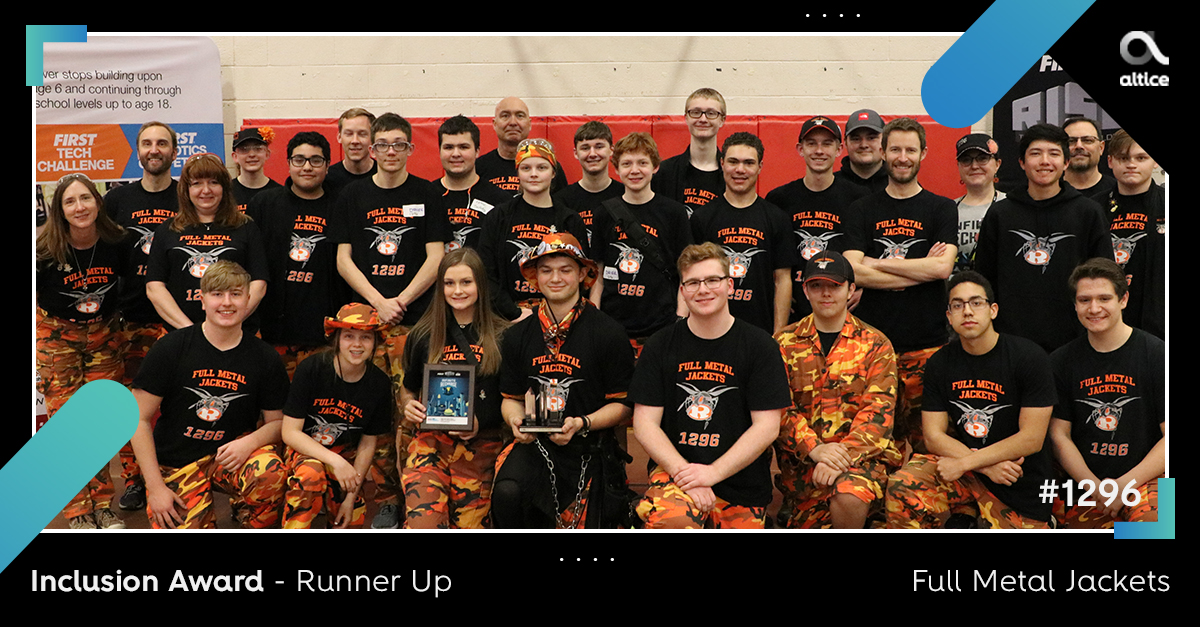 The Full Metal Jackets have demonstrated many efforts to inspire more girls to pursue interests in STEM, hosting an all-girls event that included participation from girls from all over Texas, several neighboring states and Mexico. Following the event, they created a guide for other teams interested in hosting similar events. The team also worked with Rockwall's Mayor to declare a STEM Gals Day to raise awareness of women in STEM. They have also welcomed other teams to their shop to mentor them throughout the season, demonstrating their passion to inspire others.

Despite limited resources and the odds stacked against them, the Union City Magnegeeks have been successful in recruiting members and inspiring interest in STEM and are proud that nearly every one of their graduating seniors have decided to continue their education in a STEM related field.

The CocoNuts are a team that has demonstrated perseverance, acceptance and inspiration. They mentor and support teams in remote areas where access to STEM education and materials is limited and have worked to catalyze the growth of robotics in AZ and NM over 900% in the past 11 years. They advocate the importance of STEM education to state legislators and created a professional development course that was presented at FIRST headquarters and to districts where teachers earn professional development credits.

Kronecker Delta is a rookie team that was started in the 2018-2019 season. Since last year, the team has doubled in size and gained skills that allowed them to go from building a robot crafted of primarily wood to building an aluminum robot with intricate details and mechanisms. They learned from mistakes made last season and developed a leadership board for their team, including many female members. They have also expanded their fundraising efforts and have succeeded in gaining support for their team.

The Regal Eagles from Bethpage, NY

The Regal Eagles have made it their mission to ensure all students have access to STEM and Robotics Education. After seeing the lack of STEM programs in their local primary schools the team instituted a Makerspace in the middle school and have advocated for over $2.5 million from the district to set up STEM labs for elementary students. They have also donated STEM kits to children in Hungary and Morocco, developed a STEM camp curriculum for students in India, and developed global programs such as "STEMpals," a pen pal program to connect students with common interests in STEM, and a Slack-chat called F4 that involves over 150 students across 3 continents. The team also hosts a pre-season event for all Long Island FRC teams, building a full-sized field and giving their peers the opportunity to troubleshoot issues, have driver practice and share ideas and strategies

The POBots from Plainview, NY

The POBots have a mission to use their skills and knowledge to inspire and provide opportunities to their community. They host an engineering awareness night for parents, students and community members, work with boy and girl scouts, and have introduced robotics initiatives to a local Coding School. They have a strong commitment to mentorship, with 30% of their new members coming from younger FIRST programs and have worked to develop an educational program that teaches rookie members introduction to the mechanical, programming, analytic and eletrical skills.

Visite  Altice Connect to learn more about Altice USA’s dedication to providing opportunities and resources to help inspire the next generation of innovators.

Small Talks for Small Business: How to Boost Your Sales Through Social Media - Part 2